My music making began in 2000, when one day walking through town after work, I stepped into a Radio Shack shop that had a closing down sale.

There was an Optimus electronic keyboard discounted from £75 to £25, and totally on the spur of the moment, I bought it.

It was a really basic board – no recording facility, and pretty terrible instrument voices. The only usable voice was ‘Bowed Glass’ (which actually was very good; I’m not sure I’ve ever found such a nice ‘Bowed Glass’ since!).

I quickly put together a couple of really simple tunes (which eventually became ‘First Set‘ on my first album ‘Prologue‘). Because there was no inbuilt or output recording facility, I had to keep playing them to remember them. I experienced a strange characteristic of memory that I had never quite experienced before: I’d make up a tune, play it over and over that day … and then the next day find it really difficult to remember. I had been familiar with the difference between short and long term memory (having studied Psychology at University), but there seemed to be a different type of ‘auditory’ long term memory which works very differently.

I soon realised that I had the bug for creating music, and was busting to be able to compose multi-track music.

My husband was completely supportive and encouraging all the way, and we soon purchased a moderately grown up keyboard – a Yamaha PSR-225. Its recording, voice settings, and touch sensitivity features seemed amazing after the little Optimus! Shortly after that we sorted out some digital music recording software (Cakewalk), and I was all set up!

My music is instrumental classical / folk in style.

A few years down the road, I was finding less time to spend creating music, and my old Windows 95 PC finally conked out … so I had a while of doing very little.

Then in the summer of 2017 we splashed out a new PC and new recording software, and I picked it up again. 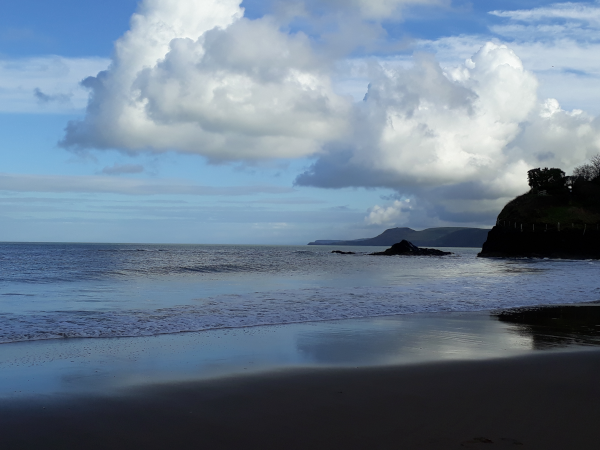 I have lived in West Wales for nearly 25 years, and I can’t imagine now not being able to see the sea ♥