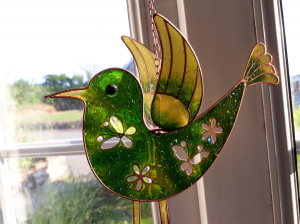 My music making all began in 2000, when one day walking through town after work, I stepped into a Radio Shack shop that had a closing down sale.

There was an Optimus electronic keyboard discounted from £75 to £25, and totally on the spur of the moment, I bought it.

It was a really basic board – no recording facility, and pretty terrible instrument voices. The only usable voice was ‘Bowed Glass’ (which actually was very good; I’m not sure I’ve ever found such a nice ‘Bowed Glass’ since!).

I quickly put together a couple of really simple tunes (which eventually became ‘First Set‘ on my first album ‘Prologue‘). Because there was no inbuilt or output recording facility, I had to keep playing them to remember them. I experienced a strange characteristic of memory that I had never quite experienced before: I’d make up a tune, play it over and over that day … and then the next day find it really difficult to remember. I had been familiar with the difference between short and long term memory (having studied Psychology at University), but there seemed to be a different type of ‘auditory’ long term memory which works very differently.

I soon realised that I had the bug for creating music, and was busting to be able to compose multi-track music.

My husband was completely supportive and encouraging all the way, and we soon purchased a moderately grown up keyboard – a Yamaha PSR-225. Its recording, voice settings, and touch sensitivity features seemed amazing after the little Optimus! Shortly after that we sorted out some digital music recording software (Cakewalk), and I was all set up!

A few years down the road, I was finding less time to spend creating music, and my old Windows 95 PC finally conked out … so I had a while of doing very little.

Then in the summer of 2017 we splashed out a new PC and new recording software, and I picked it up again.

I have lived in West Wales for nearly 25 years, and I can’t imagine now not being able to see the sea ♥

This website uses cookies to improve your experience while you navigate through the website. Out of these, the cookies that are categorized as necessary are stored on your browser as they are essential for the working of basic functionalities of the website. We also use third-party cookies that help us analyze and understand how you use this website. These cookies will be stored in your browser only with your consent. You also have the option to opt-out of these cookies. But opting out of some of these cookies may affect your browsing experience.
Necessary Always Enabled
Necessary cookies are absolutely essential for the website to function properly. This category only includes cookies that ensures basic functionalities and security features of the website. These cookies do not store any personal information.
Non-necessary
Any cookies that may not be particularly necessary for the website to function and is used specifically to collect user personal data via analytics, ads, other embedded contents are termed as non-necessary cookies. It is mandatory to procure user consent prior to running these cookies on your website.
SAVE & ACCEPT